﻿ Psoriasis - symptoms and how to get rid of it 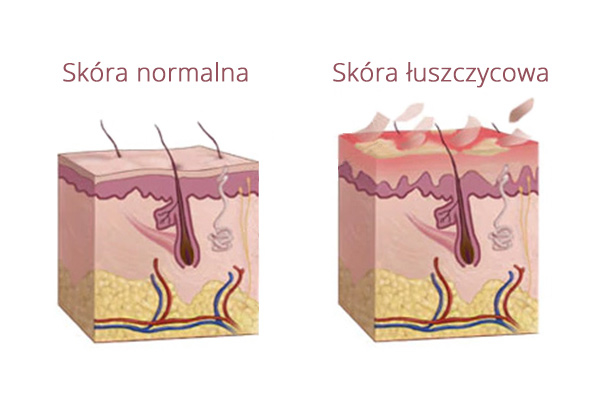 Is this psoriasis already? What are the first signs of psoriasis?

Psoriasis is still a big mystery today. It is not known what causes it and it is treated throughout the whole life. The question arises whether there is a chance to get rid of it completely? If not then how to minimize its occurrence?

Psoriasis (Latin psoriasis) is a skin disease, the cause of which is still inscrutable. There are many hypotheses regarding the reasons for its appearance, however, none of these theories is fully confirmed by scientific evidence. Some researchers suggest that psoriasis is an autoimmune disease, which may mean that it is not known why the body begins attacking its own tissues and destroying them. Some people think that psoriasis is a family disease. If the parents had psoriasis, there is a huge likelihood that children may also have the same skin problems. If we talk about the age at which psoriasis can be most common, it is assumed that it is between 10 and 40 years of age, but it can be more and more often observed that psoriasis affects people even after 70 years of age. It is believed that the so-called "Late psoriasis" may be due to older people taking large amounts of pharmacological drugs.

The most common stimulus for the first outbreaks of psoriasis is inflammation, e.g. in the sinuses or teeth or after viral and bacterial infections such as angina or flu.

Psoriasis is unsightly and tiring, it can introduce complexes. It can start under stress. It can also be passed on by the mother - then she will be stuck in the sleep phase. Come, the main causes are unknown, there is a relationship between the appearance of psoriasis and the state of the immune system or the presence of ringworm.

The main symptoms of psoriasis are various skin lesions that begin with ordinary redness, and end with, for example, keratosis-like scales. Initially, they are the size of a head from a pin, in theory, to grow to a size covering the whole body. In addition, the body can attack several types of psoriasis simultaneously. They can appear in different places, so that with time, as they grow, they will merge into one great creation. By neglecting the symptoms, you can just lead to this condition. Two of the most popular varieties of psoriasis are geographical and annular psoriasis.

The first one took its name from the shape of the resulting skin eruptions. Namely, the outline of psoriasis on the body will look like islands / continents. The other one will resemble a growing ring / ring. The red spot, which is a psoriatic lesion, will begin to fade from the inside at some point. The weaker the body's immunity, the easier it can get psoriasis. Lack of knowledge of the main pathogens causes the threat lurks just around the corner. High stress or fungal infections can accelerate the process of its appearance.

It is assumed that psoriasis touches 2-4% of the population of Europe and the United States, with the inhabitants of the Far East in South America are definitely less frequent.

It is assumed that psoriasis touches 2-4% of the population of Europe and the United States, with the inhabitants of the Far East in South America are definitely less frequent.

What affects the appearance of psoriasis?

Here is a list of factors that can be considered as fuses for this disease or for those already suffering from this disease as causing relapses.

To the above-mentioned factors should also be added: smoking, alcohol, obesity or the use of cosmetics.

Psoriasis is a non-communicable and benign disease that occurs chronically. She also has a tendency to relapse or remission.

Treatment. What to do to relieve the symptoms of psoriasis?

At the very beginning, psoriasis is only treated externally. At the moment when the use of various ointments or appropriate radiation does not help, oral drugs are administered. Therapy begins with the removal of the scales. To do this, you should brush the skin with keratolic preparations with salicylic acid. Ointments are already applied to the cleansed skin - cygnoline, vitamin D derivatives, sometimes steroid ointments or immunosuppressive drugs that are responsible for the immune system are also used. Phototherapy, i.e. skin irradiation, is a very effective therapy. Before the exposure, photosensitizing preparations must be used. You need to do about 20 treatments, 2-3 times a week to see the healing effect.

The fact that psoriasis should not be underestimated may be evidenced by new research results which prove that in the group of people who suffer from psoriasis, most people declare suicidal thoughts. Low self-esteem and lack of interpersonal contacts and social support contribute to depressed mood and depressive disorders. That is why the acceptance of people suffering from psoriasis and the appropriate level of public education on this subject are so important. It has already been proven that people who have accepted the disease of psoriasis tolerate it better and, moreover, outbreaks appear much less frequently. That is why it is so important not to stress and accept yourself.