﻿ Parasites symptoms of their presence in the body - how to get rid of them? 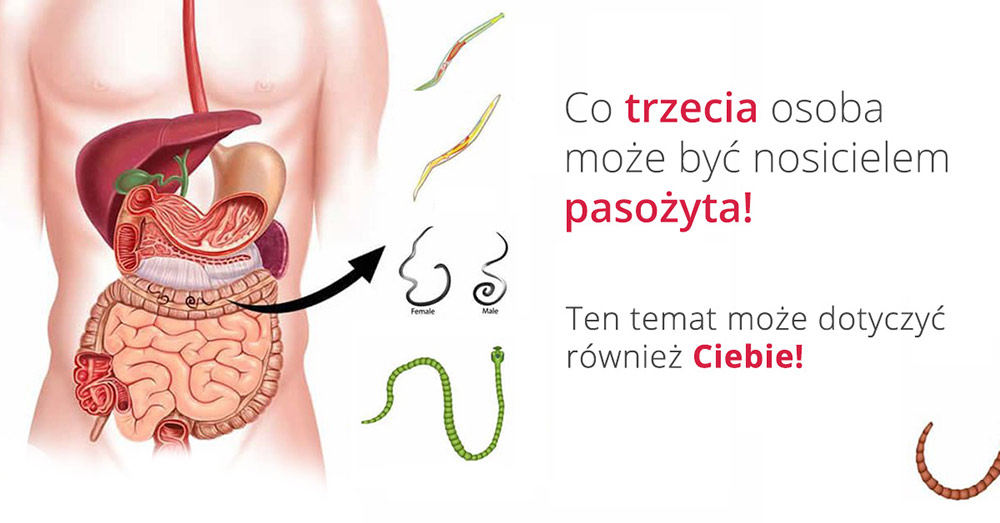 Probably every third person is a carrier of parasites. Every year, they cause millions of people to die around the world. They lead to many serious and difficult to diagnose ailments. Check what parasites can inhabit your body and familiarize yourself with the symptoms that they can cause.

Do you think you know your body well? And did you know that they can be inhabited by creatures you never knew existed? We are talking about various types of parasites - their infection can easily be overlooked.

The World Health Organization data shows that even one in three people can be a carrier of the parasite (often unaware until the infection gives clear symptoms).

Parasites kill millions of people around the world every year. See what your body can inhabit and how to recognize that you are the host of a foreign body.

This species of tapeworm lives mainly in the intestines of animals such as dogs, wolves and foxes, sometimes also in cats. However, it is a threat to a man who can be an intermediate host for him. Echinococci cause a disease called echinococcosis or echinococcosis. In humans, infection can occur when eating fruit and vegetables to which the tapeworm eggs are attached. The threat occurs mainly in the case of forest fruits such as berries (they have contact with foxes), but we can even get infected by eating vegetables grown in our own garden. How is this possible?

We walk with our domestic animals in the woods. They may have contact with infected faeces or drink contaminated water there. Then they spend time with us in the garden, where they spread tapeworm eggs attached to the coat. The unconscious man eats self-grown fruit and vegetables, thus becoming a host for Echinococcus.

Infection with this parasite often gives no symptoms even for several years, slowly destroying the host's body at that time. For this reason, echinococcosis diagnosis is usually accidental and occurs late in the disease. The main symptom is the appearance of a cyst that is most common on the liver. The cyst causes cholestasis and hepatitis. If it is not detected in a timely manner - it will burst. Echinococcus fluid will spill into the peritoneal cavity, the parasite will spread and anaphylactic shock will occur. Echinococcosis can affect the bones and lead to their atrophy or fracture. If the disease reaches the lungs, it compresses the lung tissue, causing atelectasis. Echinococcosis is also dangerous for the brain - the symptoms and effects of the disease are almost identical to those of a brain tumor.

It is a parasite that lives only in the human body, it spreads through infected droppings. It causes celandine, which can be infected most often by eating unwashed vegetables fertilized with human faeces or drinking contaminated water (e.g. while bathing in a lake).

Every year, celandine causes around 20,000 deaths worldwide. Outbreaks of this disease occur most often in places where the sewage system is not well developed and where hygiene problems occur. This does not mean, of course, that in Poland this disease does not occur - it is diagnosed infrequently, but nevertheless it is worth taking some precautions to avoid it.

The ascariasis often is asymptomatic, which is why it can be difficult to diagnose. However, it may give the following symptoms: dizziness and general weakness, swelling of the face, excessive excitability and allergic reactions. In addition, human roundworms that move to the lungs cause pulmonary worms. Its symptoms include fever, coughing and wheezing.

The most common complications of ascariasis are intestinal obstruction, acute pancreatitis or biliary tract inflammation, intestinal torsion, and appendicitis. If roundworms get into your mouth, they can even stop you from breathing.

These are two types of parasites that live in the human body. They live in the intestines for up to several dozen years and can reach a length of several meters! They cause tapeworm, which is a zoonosis. Infection occurs by eating meat that has undergone insufficient heat treatment (it is raw partially or completely) and contains parasite eggs. They reach the human digestive system, causing numerous ailments such as abdominal pain, vomiting and diarrhea, rapid weight loss, constipation and general weakness.

Man can also be the intermediate host for tapeworm and in this case his existence in the body can be very dangerous. Tapeworm larvae accumulate in the muscles and internal organs, causing impairment of their function. If the tapeworm goes to the lungs, brain or heart, it can lead to the death of the carrier.

THREADWORMS - PARASITES NOT ONLY IN CHILDREN

Enterobiosis is a disease associated mainly with children and kindergartens. It is true that more children get it than adults, but the pinworms spread very quickly, causing unpleasant symptoms in the whole family. What is pinworm and how does it get infected?

It is definitely a less "popular" parasite than tapeworm or pinworm, but it still affects even a dozen or so percent of the population around the world. Hookworm belongs to the group of nematodes, can reach up to two centimeters in length and lives in the human duodenum - hence its name. It causes ancylostomosis, also called "anemia of miners" (in the past it was diagnosed mainly in this professional group). People who have frequent contact with water or moist soil are most at risk of attack.

Eggs of the parasite develop at high temperature. Infection usually occurs by swallowing eggs found in contaminated water or unwashed vegetables and fruits. There are also known cases of larvae entering the body through the skin in barefoot persons. Symptoms of the disease include: cough, chest pain, rash, as well as shortness of breath and dizziness. Duodenal hookworm infection causes pneumonia and anemia. If the parasite stays in the body for many years and no measures are taken to cure ancylostomosis, it can even lead to the death of the carrier.

If you suspect you may have parasites and would like to verify it, please come to Revitum for a body load test that will allow us to check it. At a special consultation, our specialist will present further steps that need to be taken if parasites are found. He will also choose the right diet that helps get rid of parasites from the body. If you have any questions, please contact us at +48222 502 888 or chat on our website.