﻿ Asthma - symptoms and how to deal with it. In Revitum we will diagnose its causes. 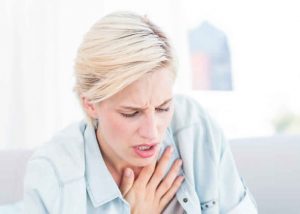 Asthma is a serious disease that is considered civilization these days - it has more than 300 million people worldwide.
In Poland, the problem of asthma is also noticeable. It is estimated that it affects about 10% of the population, both adults and children. The number of patients is growing at an alarming rate, and is contributing to this, among others air pollution.

Asthma is characterized by attacks of breathlessness during which the exhalation of air is difficult due to smooth muscle spasms in the upper respiratory tract, which causes coughing and shortness of breath. Patients complain of frequent wheezing, tightness of the chest and bouts of an uncomfortable cough, during which secretions that are difficult to expel are formed.

Asthma symptoms usually get worse when you are exercising, at night or when in contact with cold air. The frequency of symptoms varies from patient to patient: some experience asthma attacks quite often, others only once in a while. Also, the severity of the symptoms can be determined individually.

What are the causes of asthma?

Asthma is associated with chronic inflammation. It is also affected by allergies, deficiencies of fatty acids, vitamin deficiencies (e.g. magnesium, vitamin B), food intolerances, sensitivity of the body to preservatives, gastric acid deficiencies, mycoses, candida, parasites and nutrient deficiencies in general.
The causes of asthma are not fully known and it is difficult to clearly determine them. Certainly, both genetic and environmental factors influence the development of asthma. Environmental factors include: allergens, chemical compounds present in the air and the level of its pollution. The risk of developing asthma also increases if the child's mother smoked cigarettes during pregnancy. Studies show that asthma is more common in people who received antibiotics early in life, and in babies born via caesarean section.

The genetic factor is the occurrence of asthma in family members. It's mainly about genes related to the immune system. It is also estimated that if one of the identical twins suffers from asthma, the other has up to 25% risk of developing this disease.

Asthma is more common in people suffering from atopic dermatitis and hay fever. It is also associated with autoimmune diseases. The likelihood of developing asthma also increases in obese people, because their respiratory system is more loaded and less efficient.

Can asthma be prevented?

In the past, efforts were made to prevent asthma with appropriate nutrients. An example is ancient Egypt, where, for example, it was recommended to eat a large number of figs, grapes, juniper fruit and wine. In China, tea leaves were used, from which the asthma drug - theophylline - was obtained.
A possible way to prevent asthma is to avoid factors that increase your risk of developing it. It is worth limiting smoking (also passive) and contact with air pollution and chemicals, for example at work. Regular physical activity and a healthy diet are also important, which will avoid excess weight. Pregnant and lactating women should not be exposed to cigarette smoke and being in contaminated rooms.
Unfortunately, we have no influence on genetic factors that contribute to the development of asthma. In the event of this disease in the family, it is especially worth taking care of a healthy lifestyle and regularly monitoring the condition of the body. Natural forms of supporting immunity and a hygienic lifestyle can be helpful.

If you are looking for a reason and would like to strengthen your body with natural preparations, visit Revitum.